The Art of Regurgitating Furballs 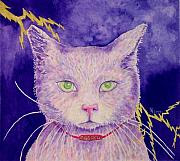 During a recent stay in hospital I was thrown out for impersonating a general anesthetic. A patient, Mr M., ninety-eight - who claimed to be partially deaf in one nostril - accused me of infiltrating his memory during an operation to have a pinprick removed from his finger. Mr M., was in surgery for an hour and remembers nothing. In fact, that missing hour of his life is a dark void bereft of sensation, feeling, and emotion (uncannily similar to when my wife and I attempt sex).

My defense includes the following:

1)  I am addicted to the smell of warm metal. In fact, I've blacked out twice sniffing my TV.

2)  I believe the word 'chopsticks' should be hyphenated.

3)  It is difficult to remain calm while the world of Twitter, Facebook, MySpace, iPods, iPhones, and texting collectively destroy the human race. The facts are undeniable, uneatable, uncalled-for (just like marriage). They poison our freedom. Can an individuals life be so bad it must be supplemented by gadgets offering a faster, smoother experience. In the meantime, I'm sticking - literally - to massages with cool coconut oil applied by skilled, smooth female hands. It is therapeutic, relaxing, and I don't have to engage in meaningless, mindless conversation unless I so desire. Adorning a different disguise each day has its downside but it's worth it just to be enveloped - albeit temporarily - in the scent of mint, basil, lavender, marjoram, and to step once more among the throng feeling crisp, calm, refreshed.

4)  Sometimes I go away for several days and I am left alone at home with a bottle of hair dye. Why would someone close to you do such a thing? I'm forced to sit by the telephone and computer to receive confirmation of my whereabouts.

My solicitor believes I may get a light sentence: a dose of chloroform, or be forced to sniff ether from a begrimed medicine bottle. He advised, however, that I may be asked to explain the title of a film, for example: Duck Soup, Reservoir Dogs, Quantum of Solace, or - heaven forbid - Rebecca of Sunnybrook Farm.

*
Last week a neighbour, Kant Sitwell, was struck on the head by lightning. He was standing in his garden disguised as a ship and shouting: 'Smallpox Aboard! Smallpox Aboard!' I remember Kant once told me he could locate buried treasure just by looking down his wife's throat. Anyway, he appeared, at first, to have sustained no serious injuries after the incident. Then, unexpectedly, he experienced an intense craving for cat food, walking about on "all fours" with a can opener between his jaws, sleeping on a cat-hammock on a radiator in his living room, and entering and exiting his house via a cat-flap.

When Kant began to use neighbours gardens as litter trays, and to loudly meow from his roof in the middle of the night, tempers frayed. He wanted attention, reassurance that his family and neighbours were still around; that he was not alone. Yet something had to be done for the sake of the community's [sic] sanity. With strong support, and little logic, it was agreed he should be boxed and shipped to Oxford to sing, or play organ, with the New College Choir. I'm sure Kant still enjoys climbing trees, grooming his coat, and hurling fur balls at unsuspecting passers-by, when choir duties permit.


*
Reflections: My house is still and the street outside (which reflects a ghostly layer of life) is moving. Perhaps I should ease my intake of nitrous oxide? I gaze at my 'new' wife. In most aspects she appears not to have aged since we first met three days ago. Except for grey hair and a white beard she still looks youthful, agile, hairy.

However, her stubborn habit of nail-biting is driving me to distraction. This afternoon a neighbour complained that my wife's 'infuriating habit' had caused the boundary fence between our houses to collapse. When he asked for all the nails to be returned I honestly said my wife was about to finish them off. In fact, she is swallowing the last six inch steel nail as I type.