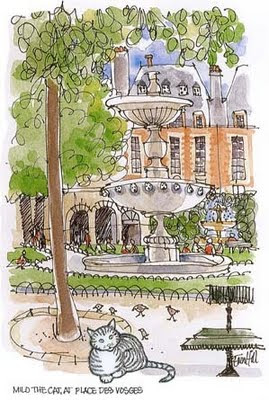 It's a fine sunny morning in Place des Vosges. Today, without warning, R.K. died in a half empty flat. My name is Lid (spelt without the L), a phony professor, of sorts: well aware of R.K.'s successes and failures, but not my own. I was first on the scene. His last words? 'Milo! Come in out of the rain! You'll catch your death!' Some might say, 'Poor R. K.' Others may say: 'He was due the alternative.' 'Was he juggling carving knives? Not that he had any.' 'He was born with a face you longed to thump.'

Was he a dark-eyed tomboy? No. Blue eyes, blond hair (until he was born), with an amicable anxious face. His humour could make a deceased person breathless; carry one to a place of exclusion, where nothing exists except a magnificent silence. The occasional tear, but no self-pity. A suggestion of despair, but no fresh disasters.

He was once dismissed as a mixture of repressed emotion and personable; it can never be said he was an actor; that his life was built around performance. His life was unactable. He once admitted, 'Life is a hateful comedy. ﻿If only I had been a character in a book I should have remained unseen, unheard, implausible. I pleased many people by being elsewhere. I openly scorned charm radiated by others; though I softened my abrasive edge prior to my demise.'

'My happiest time? The mid-1960s. Why? Without exhaustion I was loquacious, a loose cannon. I recall talking to people about matters I knew little of myself. The absurd conversing with the absurd. Deliberation. Animation. Vanity. Inescapable.'

His father (short on humour, long in the leg) was a nun. He died in 1998 after falling off a donkey in the family home and swallowing the donkey's false teeth. The donkey died in jail after being caught interfering with a hen. R.K.'s mother (short in the leg, long on humour) was a recluse who enjoyed walking the fields, lanes and roads near her home with her dog, Plato. A woman fond of reciting Aristotle's Law of Non-Contradiction to those she encountered.

When R.K. reached seventy his world moved progressively inward. He moved to Paris in 2006 and lived in a fish tank in a French Restaurant on the Rue Saint-Marc. A year later he relocated (with two fish) to a soup bowl in a café on the Boulevard Saint-Germain. The fact that neither R.K. nor the fish spoke French did not provoke despair, tension, or yearnings. For entertainment they listened, and danced, to a gramophone recording of barnyard noises.

*
Reflections: A blind man once told me he could tell by my voice that I had never observed or understood anything in my life with any degree of clarity. When I asked him, 'What does it mean to be a good person?' he smiled. 'That is hard to define. But one should know, and not need to inquire of another human being.'