Mirror, Mirror on the Wall: I Look Weird From All Angles 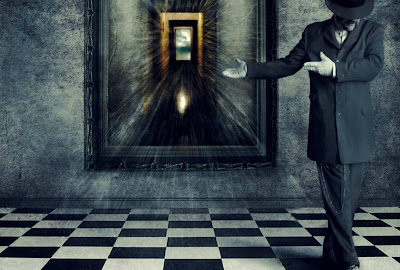 I admit to being socially maladroit. The last time I shook a person's hand it belonged to my wife Ingrid at our wedding in a Bleecker Street playground. When she chirped, 'There's nothing in the world we can't do if we stay together' I felt the onset of a migraine attack. Suddenly Ingrid looked different; her facial features began to blur; she looked almost feminine. She raced about the playground like a crazed weasel, 'My whole body is tingling! Let's stay up all night, every night, until we evaporate!'

Her mania drove me to Distraction: a small town on the upper floor of a shopping mall in North Carolina. When my mind seemed clear I changed my name to Olive Pickle, and walked the streets 'trying to be, rather than to seem.' Occasionally I shouted at gulls circling overhead, 'Slow Down! For God's sake, slow down!' Two birds landed on my shoulders, pecked at my fake toupee, and screamed for food. I've barely slept since it happened.

My 'unsound sanity' is still intact, at least. Ingrid? Probably guzzling her way through a large box of chocolate éclairs in South America. However, I realise she may be in the Far East meditating on the memory of her youth with envious suffering, while checking a restaurant bill she can ill afford to pay.


*
My current girlfriend Lorna is preoccupied with her body. She continually 'undresses and dresses' when the mood strikes. Whether it's in a private or public location is immaterial. Indeed, Lorna has perpetrated the performance in front of work colleagues at CIA headquarters. I see nothing inherently wrong in such behaviour, but when it's a guy at the deli?! ... well, the curiosity value tends to fade rather fast, like making love without enriching either your own or your lover's existence.

Nothing alters the fact that Lorna hasn't a clue where the CIA building is located. Each morning she is bundled into the trunk of an automobile by a man wearing a black turtleneck, and a white baseball cap which covers a wart on his left buttock. She is then driven to a bedsit in Cuba and is dropped down a large isolated tunnel by way of Jay Leno's chin.


Lorna's grandmother, Tallulah Methadone, worked in the CIA K-9 Corps. Tallulah left when her human partner, Officer Bonio Bowser, had an affair with her younger sister, Gabby (a black Labrador from Las Vegas), whom Bonio wished to marry and raise a family.
*
Reflections: Lorna considers the left side of her face to be 'less attractive' than the right side. She favours the right side: less wrinkles, softer lips and the skin is less tense. Whenever we dine Lorna insists on sitting with the left side of her face towards a partition.

This preoccupation with the 'least attractive' side of her face extents to walking, travelling in cars, trains and aircraft, and chewing gum for a couple of minutes then sticking the gum in her left ear. I don't share Lorna's dilemma. I'm acutely ugly, and each time I blink in the bathroom mirror it confirms I look bad from all angles.