The Origin of My First Name & Ronald Coleman 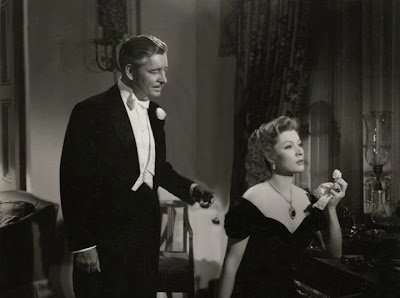 I am sitting in a chair thinking of my name, how it came about, and why well-manicured fingertips usually belong to people who wear velvet knee breeches while taking a bath. I'm studying a photograph of my mother laughing, her joyous mood apparent. She is sitting in an armchair in the back garden; I am resting on her lap. She is shading her eyes from the sun with her right hand and looking straight into the camera.

My mother is cheerful and so am I. The armchair? Impossible to tell. I remember asking my mother the origin of my first name. She told me I was named after the English actor, Ronald Coleman. Naturally, he was indecently handsome (my mother preferred him with a moustache), well-mannered, impeccably groomed and statuesque. He took care to preserve his looks, of course, and it worked its charm on my mother. He often played an autumnal and amused romantic.

My distress was compounded by my mother's insistence that he possessed a beautiful speaking voice. By contrast my own voice had yet to take shape. What chance did I stand against Ronald Coleman, who could switch on surface charm at will? I lay in bed at night tormented by a man I had never met, nor ever would. My life had been thrown into despair by images of a charming, intelligent and 'indecently handsome' movie star. I can say, without fear of contradiction, that nature has not been generous to me either in terms of my build, my face, or my speech.

As one gets older, however, one understands the ambiguity and the need to distrust images. The faces of film stars and beautiful people still haunt me, but in the darkness I pay little attention to their features. They are destined, like me - and those I love – to the same destiny. This thought does not bring me solace, only anguish.

Nevertheless, my mother and I spent precious afternoons watching b/w reruns of the film Random Harvest which was released in 1942. A part Ronald Colman played opposite Greer Garson. I had never seen such a beautiful woman on film or television. Everything seemed simple, yet fantastical. One day, I would miraculously encounter Greer Garson, propose marriage (she would implausibly accept), and Ronald Coleman would be invited to "our" wedding - much to my mother's delight, of course!


*
A recent study, conducted by Doctor Wilkelfield Finkelfukal, on how your name has a profound effect on how serious you may be taken by others is not to be published in the foreseeable future. In a statement, the publishers, Donski, Donner, and Kebab, said the Doctor's name was unpronounceable (even by the Doctor, himself), had no appeal, was too long, and - combined with his bumper-pad hips - made promoting the book analogous to flying to the moon in a garbage can. If the Doctor, however, is willing to adopt a reasonable pseudonym there remains a chance the book will still hit the shelves: mostly by those foolish enough to buy the book.

Reflection: Some people underestimate the importance of living for the moment. Most things of value tend to be of a transient nature: laughter, joy, love, happiness, family, friends, good health and memorable encounters.