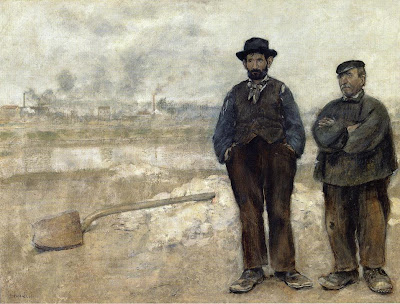 In the suburbs of a city two men stand talking.

John:  I took pride in the job. I was as happy as the day was long.

Paul:  I wonder what the 'Good Fellow' up there thinks about all this?

John:  It's a sad freedom we face.

Paul:  I feel a madness descending.

John:  ﻿They say I had the smile of a saint.

Paul:  I'm frightened of the young. Splitting themselves laughing ... Riotous behaviour. Were we ever boisterous like that?

Paul:  You were well known for that.

John:  A fine open laugh, and a firm handshake. I was smart. Played them at their own game.

Paul:  No one better.

John:  All I see now is the end of the road. What will I tell Mary? And us living in a crumbling, dark house.

Paul:  I could do odd jobs if it weren't for my rheumatism.

John:  When I was young I thought I knew my mind. But events, personalities, guilt, changed all that. I'm not one for bearing grudges. All I desired was a warm home for Mary's sake. She has stood by me in thick and thin.

Paul:  As beautiful as pink linen raised to the sun.

John:  Victims of mismanagement, ineptitude. (Pause) There have been others like us, and there will be others' long after we're gone. What matters is what they want. They'll wreck the place. But it will be replaced. As sure as hell, it will be.

Paul:  We devoted our lives to their demands. Do you think anyone cares about the daily existence of ordinary people?

John:  The silence is deafening. We've been cold-shouldered. Now we're a burden. (Pause) There's no denying nature has dealt us a mighty blow. How are we to move forward? Stay on our feet? Regain our self-esteem?

Paul:  We were caught asleep when we should have been wide awake. Those loud-mouthed-good-for-nothings conspired behind our backs. Nothing but "touts and traitors" to the real workers! Every one of them!

John:  As the body grows sadder life gets harder. I have my wife and son to worry about. What shall I say? Mary will be upset. She'll think I did something dishonourable. How will she look at me and see the same man again?

Paul:  We're victims of gamesters content for us to play their game with their rules. It never crossed their minds we have opinions and ideas of our own. They shrugged their shoulders and laughed. Fraudsters, plunderers, adulterers, riffraff, the lot of them.

John:  Today the earth feels empty except for the two of us standing here. We're suffering because of their indifference, lack of imagination. (Pause) There's more than one reason for anything of importance that happens in life. Disharmony, disorder and disaster do not happen by chance. We worked under the illusion they were principled, honest, intelligent, of high virtue. Who will judge their transgressions and insincerity?

Paul:  I achieved great pleasure carrying out my work. Today I view it all with contempt and misguided loyalty.  In truth, I despised them. Some of their directives and beliefs went over my head. I'll not lie. Why should they escape personal judgment? Are we to remain passive to their back-room politics and intrigues? What about the decisions taken while we were understaffed and overworked. (Pause) Their stench pervades the wind. I can hardly breathe. The 'name' will be sullied forever.

John:  My parents lived with ease in hardy, rural surroundings without the clitter-clatter of unnecessary worldly goods. They didn't have the extremes of anxieties that beset those who have lost touch with the world and nature. Yet, they were happy. We took long walks through the fields and forests, up and down hills accompanied by the sun or dark-blue clouds. I remember looking up at my father and mother with love shining from my eyes. I remember squeals of laughter, teasing, listening to my breath.

You and I have families to support. Callousness and careless actions have closed our workplace, without prior notice. Yet our ideals remain the same. The hard light of the sun has waned for now. That's the way it is. We must open the doors of disillusionment soon, otherwise our lives won't hold water.

Paul:  I can no longer believe in the future. I'm old and the world is going to hell! They should be condemned to death!

John:  A thing is beautiful until it is perfected. Then it becomes ugly and, worse, arcane. The fiasco of life is that the search for perfection is illusory. That's how it must be for the moment.

*
Reflections: Until today I wasn't sure what the most dangerous thing was in my home. I thought it was my drug-addicted, hatchet-waving son, running around in the sunken hours of the morning screaming 'Enter Sandman!' I was wrong. Recent research has confirmed that 'all' dishwashers  contain 'black tough fungi'. This 'fungi' is known to survive heat, salt, strong detergents, acid, beatings with baseball bats, and missile attack.

Since this information came to my attention I sleep in a wardrobe in my bedroom. I constantly smell of mothballs. In fact, during one period of severe trembling (on hearing objects moving in my kitchen) I swallowed four or five mothballs. I hallucinated and became a hair in Einstein's nostril. As to how and when it will all end I have no idea.