Writing with Courage, Truth and Integrity: The Bravery and Determination of Malala Yousafzai 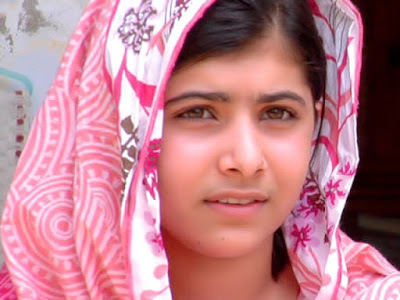 Sometimes for a writer to resonate in modern culture the narrative requires courage, truth and integrity; a commitment to freedom and justice. Many writers, bloggers and journalists throughout the world have been murdered, or brutally beaten, because they wrote about crime, corruption and the right to freedom of expression.

What about the acts of suffering and violence occurring in the world at this moment orchestrated by those in power and in control of information, knowledge and the media? What is their agenda? One of their many objectives is to distort the truth about those who do not have power.

I greatly admire the bravery and determination of Malala Yousafzai, the 14-year-old schoolgirl, who committed no crime, but was shot at point-blank range in the head by a Taliban gunman for her campaign for girls' education in Pakistan and for speaking out against 'Taliban oppression'. I hope she makes a full recovery. Given the extent of her injuries, however, it will be a long, complex and tortuous journey. I hope that the 'Taliban cowards' who ordered, planned, and carried out the attempted murder of Malala, are caught and receive sentences befitting their crime.

Writing with conviction and truth is not without danger. Sometimes police and employees of local administrations are implicated in the attacks on writers, bloggers and journalists.

No police force in the world is above the law. Any alleged acts of corruption, racism, torture, incompetence, indifference and collusion must be investigated, and individuals arrested and brought before a court, where necessary. People must be convicted for the crimes they commit on writers, irrespective of the perpetrator's position in society.

It follows that this should apply with respect to all violence wherever it is perpetrated on this earth. No one should remain unpunished for senseless acts of violence no matter how deluded their motives may be: patriotism; loyalty; nationalism; religion; economic and political power; money; drugs; greed.

We live in society. But to say we all live in communities gives a sense of false security. This not only stretches an acknowledgment of reality, but demeans the law and the life and memory of those people who have been murdered. Meanwhile their attackers bask in freedom, go unpunished, and in some quarters, are hailed as people of distinguished courage, and are rewarded for their despicable actions.

Indeed, some perpetrators of violence no longer seek anonymity, but live with impunity, and are constantly in search of the limelight. Just don't expect some individuals to voice contrition for their criminality, for many carry a bitterness towards humankind which endorses their deluded sense of superiority.

Some people in positions of great political power rarely want the truth to be made readily available to citizens. They are on a collision course with death and destruction, and look upon fellow human beings as insignificant, dispensable, a meaningless statistic.  A serious and harrowing situation; criminal in itself.