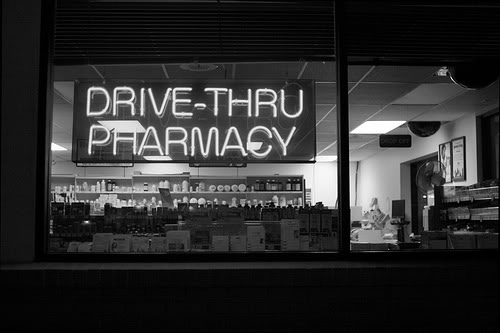 I met my current girlfriend, Kerstin, in a drive-thru pharmacy where she is the Chief Pharmacist. While she looked weary, I was drawn to her intense blue eyes, the curve of her lips, her natural dark brown hair and overt beauty. I also felt attracted to the tattoo lettering on her forehead: Shake Well Before Use. I tried to cheer her up with a few witticisms. It seemed to work. She listened, smiled, and said, 'You're crazy'. Then she laughed, 'You're crazy.' I began to worry that this might be the extent of her vocabulary. Thankfully, I was mistaken.

She has a habit of pinching my cheek but always brings it back. She enjoys it when I quietly plead,'Who's stolen my soft, well-shaved cheek?' 'What shall I do without it?' Infantile, I know, but if it makes Kerstin laugh, I'm happy to oblige. Kerstin loves dancing; I love shooting inanimate objects. Perhaps, that's why she doesn't hear every word I say to her; too busy dodging bullets.

The inevitable road to decay in our relationship has yet to show its bored, weary face. I give it another three months, or, until my ammunition runs out. Kerstin can be sensitive, and ask stupid questions: 'Am I beautiful?' 'Is my sister prettier than me?' 'Does a woman's age matter?' 'What does "ironic sadness" mean?' She's still cute, so I take whatever she throws my way, including cutlery and furniture.


*
Today a passer-by told me my hair was on fire. Unfortunately, I left it on the train. I immediately ran down the rail track like an escaped convict. I had to retrieve the wig at all cost as it belongs to my neighbour, Herry Guttenchest, who likes his hair uncombed, not half-cooked. He had kindly lent me his wig to wear in a 'police lineup.' It appears the victim of the crime, Monsieur Flambé, had the  sharp creases stolen from his trousers while he was travelling to the top of the Eiffel Tower.

As I raced past a station platform I was chastised by waiting passengers for never being on time. I remember thinking 'I should write to the newspapers regarding this matter' when I suddenly fell from a railway bridge into a river. Some men on a barge fished me out. The water was icy and black. I asked if they'd seen a burnt wig. My inquiry was met with silence and strange looks. Perhaps the men thought I had tried to drown myself.

I had to think fast. I'd bath and tell Herry that his wig had been stolen. To make my story viable I'd say the assailant had one-leg, and had been riding a unicycle sideways on an escalator in a downtown department store. Herry should buy that; he bought the wig, after all. I started to laugh. The men on the barge gazed at me in bewilderment. As I reentered the bleak river I felt light-headed. The rapture I was experiencing appeared to be shared by the swans drifting close by.


*
Reflections: One tends to make a great number of mistakes in life. For example, measuring a lover's arm with a 'spring tape measure' during lovemaking; following a spouse disguised as a cigar, a dress maker's dummy, or three policemen, to establish if your partner is up to no good, or, at least, shoulder height; mimicking the cry of the Great Black-backed Gull during a long silence at a senior management meeting; mistaking rich green grass swaying in the breeze for the ocean and decide to go scuba diving. All foolish wondrous things. But hazardous, nonetheless.