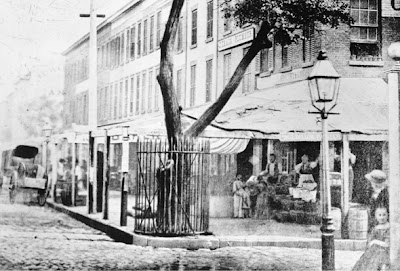 Natalie was late. We met yesterday for the first time. She was just another pretty girl walking down Fifth Avenue. Our eyes didn’t connect until she dropped a glove. I called after her, waving the glove in the air. She thanked me with a shadow of a smile and resumed walking. I ran after her, and she laughed when I said I was new in the city.

I asked bluntly if she was free tonight. Perhaps to Natalie it was my illusionary arrogance, but she stopped and looked at me from head to toe. She became prettier by the minute. She had never considered doing such a thing before, though said it might be pleasurable.

Walking away she said, ‘Eight O’clock at Pear Tree Corner. If you want to meet me you’ll find it.’

A thin breeze and a twinkle of neon helped relieve my tension as I stood outside the store. I had given up hope when a hand suddenly gripped my wrist ushering me along the street.

'Just follow me.' It was Natalie, the voice and fragrance were unmistakable.

'What’s going on? Why the dark glasses ... The headscarf?!' I found her demeanour unsettling.

'I think I’m being followed. Just trust me.' I looked around and saw what appeared to be a caravan of Japanese sightseers armed with a million cameras. 'Japanese?!'

'No!' she responded. 'I’ll explain when we get to proper surroundings.'

As we turned the corner Natalie hailed a taxi. Soon it was speeding towards the city centre.

When she turned towards me some of the apprehensions about the situation disappeared, her eyes sparkled.

'What’s your name anyway?' she smiled.

She held out her right hand and we shook hands briefly. 'Well, Conrad, it’s good to meet you. I don’t normally talk to strange men in the street, but I made an exception in your case for some strange reason. I admired your style. Hope my intuition dosen't let me down,' she winked. 'Where are you from?'

'Back there,' I replied, nodding towards Pear Tree Corner.

'Are you for real?' she laughed, looking at my face. 'I guess you are. You’re sitting right beside me.'

The sky was darkening, streaked with scarlet clouds. She asked the taxi driver to pull over. Natalie paid our entrance fee into a small gloomy cinema. Several people were watching an old movie.

'This is my favourite film. I’ve seen it a thousand times. The Maltese Falcon with Humphrey Bogart. Try to chill out.' She took my right hand and caressed it. 'You’re too uptight.' Natalie resumed watching the screen. 'Sydney Greenstreet as "Kasper Gutman" has some great lines in this film. Anyway, if anyone should be worried, it should be me,' she half-smiled.

'I thought we were on a date?'

'We are. I want to discuss a proposition. This place is as good as any.” Even in the dark I could see her soft wavy hair, full crimson lips and bask in her fragrance.

She resumed watching the screen. Now and then she would glance at me and extend a wink.

'I don’t like Prima Donnas. Tall pretty boys with strong chins. Always someone telling them how great they are. Anyway, you can’t tell someone’s good just by looking at their face, can you?' she said, producing a playful laugh.

Natalie returned to the film. 'This is my favourite part. Listen and watch closely. Amazing dialogue.'

I watched Natalie as she mimed in unison with the film. “Well, sir, here’s to plain speaking and clear understanding. You’re a close-mouthed man? - I like to talk - I’m a man who likes talking to a man who likes to talk.”

She turned and winked. It worked every single time. Even though I felt things could descend into a kaleidoscopic nightmare at any moment, I was, for now, mesmerised.

Reflections: Everyone needs dreams. Some men love soft delicate dreams and soft delicate woman. A lady of my acquaintance loves a man she believes does not dream. Yet jealousy of his thoughts keep her awake. He is a master of deception. Her virtue, wise or unwise, lies in her performance.