A Bikini Wax & Upstaging the Bride 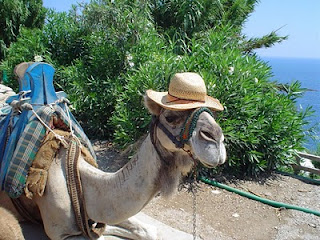 This morning a neighbour, Randy Camelus, was killed while out galloping with some companions over nearby hills. As Randy was on foot police are treating his death as suspicious. Poor devil. He had a weakness for bobbing canoes, earthenware products and impersonating a tram at rush-hour. In fact, he was arrested twice for carrying too many passengers. Randy always preferred the countryside to his home; less mud, manure, cows, nettles and flies. To be honest he got on my nerves. He felt the need to upstage people wherever and whenever possible. Once he pretended to be a hard boiled egg and turned up in my lunchbox. At his niece's wedding - held in the middle of a desert - he arrived as a camel wearing a straw hat. Most guests agreed he outshone the bride.

I remember Randy had trouble with his wisdom teeth. He had seven: three on top, two on the bottom, and one that worked and lived in Germany and never sent money home. However, it was as a salesperson that Randy excelled. Besides selling crystal balls to fortune tellers his most profitable venture involved selling bilingual individuals two of each product they wished to purchase, and had the audacity to make them pay twice. One of his greatest sales involved getting a bald-headed man to purchase and undergo a bikini wax. The man was last seen travelling eastwards across the desert with a bikini on his head shouting, 'Help! Help! I'm not what you think I am! . . . I'm not Lady Gaga?! . . . Am I? . . . I'm Madonna . . . Where am I? . . . . Boy, do I miss the stairs in my house!'

Randy maintained that the creation of prose, poetry, music, painting, sculpture, etc., is easy. This divided his world from mine. I wasn't surprised by his statement. In fact, it made me sad. I told Randy on one occasion, gently: 'All things seem easy that are created without talent.'  He didn't answer. His face became serious, pale, suddenly frail. His teeth left before him. As they scuttled across the street they collided with a car. The air was sharp, biting cold. How coincidental.  The only sound? Randy's silent tears as he lifted his shattered teeth. He looked at me, then began to soothe his teeth with the softness of his hand. I watched as he made for his home in a remote village inside an old shed behind a house close to a river in the middle of nowhere - a village called 'H'.

Randy's fate reminds me that "everything" and "everyone" go through phases of uncertainty, silent acceptance, indifference, economy of words, half-light, darkness, silence, oblivion. While he is no longer here occasionally I see his teeth pass my house on the way to the dentist. Sometimes they smile at me through the window.


*
Reflections: At the moment my attempts at writing lack focus and an elementary grasp of grammar. I've been aware of this for some time; since childhood, in fact. I spend 24 hours a day figuring out which project to work on and let my thoughts run wild. Finding them again, however, can present a problem. Once they texted me from Amsterdam. A problem with their passport; something to do with photographic ID?! Anyway, I must learn to "adjust my lens," so to speak.