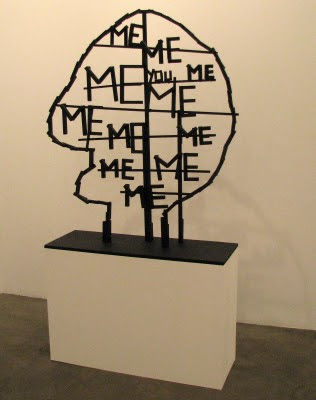 My wife is a mistress of her career and radiates confidence, intelligence, energy, optimism, strength, tenderness, responsibility, and an uncanny ability to hold a 'high C' while eating Beef Wellington in her bare feet. Sometimes she makes me feel I peaked too early in life, that I should eat my dinner in silence and go to my room. I'm still waiting for the heavy mist obscuring my vision to head west. I have major eye floaters in both eyes which makes it difficult to drive on unfamiliar roads at night. Of course, it may be due to the fact I don't own a a motor vehicle.

I tend not to last long in traditional jobs. For a while I was employed as the dull silhouette of a banker. The worthless scoundrel took pleasure in making me stand outside on cold flooded pavements while he wined and dined for hours - at public expense - with fellow dead heads. It's a shame he's no longer with us; if only to witness the court proceedings. His funeral service was painful for all the wrong reasons. Fellow dead heads stood up and used words such as: 'A man of truth and integrity'; 'A man of wisdom and warmth'; 'A man of ...' I went outside and threw up. He was a dried-out runner bean, a misshapen pebble who liked young girls though he was grey at the temples. Fellow dead heads made sure there was a constant supply.

Sometimes when I am alone I think of Nicole. For one night I was employed as her 'discreet cough'. We attended the Opera. During the performance Nicole give me a mischievous smile. We never spoke to each other. The sensation of sitting by her side for the evening made me lightheaded. I longed to touch her hair, her mouth, her body. The closest I felt to Nicole was when she passed me her Opera program. It retained the warmth of her beautiful pale hands. It was a schooling, of sorts, in hidden desire and silent passion.

*
When one is truly deprived, one will do anything. I once underwent an operation for a friend, Gotthard Hydleman. He was afraid of being anesthetized. He promised me $1000 and I considered it worth the money. I foolishly had my gallbladder removed. Unfortunately, Gotthard died before I received payment. The cause of his death?  Wearing female Skinny Cargo Pants for longer than six hours without a breather. When I asked the surgeon for my gallbladder back he declared with a smirk: 'I am so sorry, I eat it for dinner last Sunday. On the up side, I believe it has improved my French.'


*
Reflections: At 82, my maternal grandmother, Gloria Tenderloin, believes she is beginning to look her age. May I burst one of the thinnest bubble's on the planet. No one - including Joan Alexandra Molinsky, aka Joan Rivers, can stop time.

Forget facelifts, hollow faces, age spots, staying out of the sun, copying hair styles of young emaciated models, wearing short skirts wrapped around withered thighs, grey hair, baggy knees, drinking forty gallons of water a day, taking supplements. Be thankful you are alive, healthy, not homeless, unemployed, a victim of physical or sexual abuse, a person whose life hangs by a thread, or someone who died tragically young.

Most forms of beauty depend on concealment, integrity, mystery and are veiled by a mist which one may pass through to meet the real person on the other side, if one wishes. Everything else is a performance: a denial of ageing, decay, life, death. Embrace and experience your true uniqueness, your true value to others, and your true value to the world.