A Month in the Country 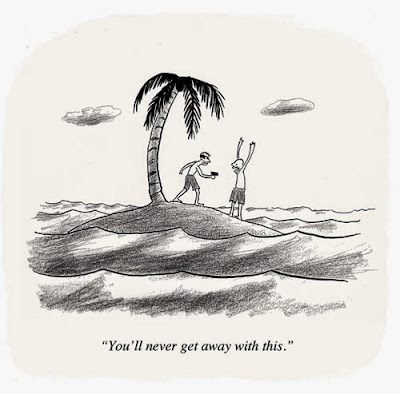 During my daily stroll on a desert island I was accosted by either a woman sporting a beard; a man wielding a beard; or a hedgehog on stilts. In truth, the incident happened so swiftly I cannot be sure. I recalled how David slayed Goliath with a simple slingshot. I took off my right sandal and threw it in the air, which to my amazement distracted my assailant. Suddenly the man's shape and features softened. I removed one of my blue cotton toe socks, filled it with five 'twenty dollar' bills, and beat him about the head. Unfortunately, the effort proved fruitless.


Despairing of hitting my assailant's head continuously with my sock (I felt the advent of a dazzling migraine), I enquired if he had change of a twenty. He announced, with the aid of a late 19th-century speaking trumpet, that he had a few nickels and quarters he could lend me. I thanked him and we exchanged currency. I filled my sock with stark bright coins. However, just as I was about to strike my assailant I was hit on the head by a flying sandal and lost consciousness.

When I came round he had disappeared along with my blue cotton toe socks. However, he left a note that read, in its entirety, the abridged works of Shakespeare, and which also solemnly declared: 'I'm heading back to Toytown where donkey's ears remain a symbol of individuality and freedom.'

A neurologist recently confirmed I have 'alien limb syndrome' - the sensation that my 'right leg' is acting of its own accord. That would account for my 'right leg' saying, 'Good Night, Good night! Parting is such sweet sorrow, that I shall say good night till it be morrow,' each night as I retire to bed. It even has the audacity to wake me during my blessed sleep to deliver a Shakespearean soliloquy; usually one of Macbeth’s troubled musings which I now find tiresome. Moreover, it has the gall to express in mocking tone, 'How poor are they that have not patience.'


This coming from a 'right leg' that walks away during conversations! Writes clandestine letters! Bleeds for no apparent reason! Runs errands for neighbours without my permission or knowledge! Quite frankly, it is tantamount to blatant attention-seeking! Even writing about my plight I find it hard to breathe.

To make matters worst my right leg is good-looking, intelligent, looks at least twenty years younger than the rest of my body, and is extraordinarily striking in a black leather jacket and heavy boots.
*
Reflections: One night I attended a performance of Ivan Turgenev's play A Month in the Country with my girlfriend Alisa. We had to leave three days after the start of the production as we both experienced dizzy spells and hallucinations due to lack of food and drink.