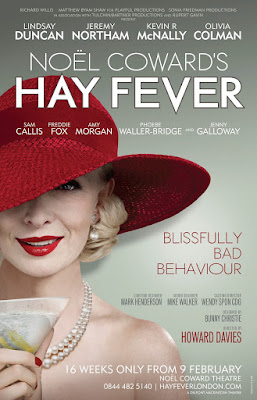 My wife has suddenly elected to stop speaking. Pleading with her to watch Persona by Ingmar Bergman payed off big time. For months she hasn't uttered a word. She's currently watching Jaws. I can tell she empathises with the Great White shark. She eats all the fish remains I throw at her. Our apartment's a mess but things are going according to plan. How will she react to the last scenes of the film when the shark's corpse sinks to the ocean floor? My wife doesn't know yet, but she's booked to go solo surfing in 'Shark Alley' near Cape Town this weekend. I expect to fly home alone . . .
*
This afternoon my daughter said something was 'bliss'. It reminded me of attending a play by Noel Coward in London titled Hay Fever - I sneezed continuously throughout the production. I believe it was Noel Coward's first comic success: not the sneezing, the play. The theme of the play is as old as Roman comedy: self-seeking, ludicrous people are attracted to fame and fortune and get their just rewards when they discover they are hopelessly out of their depth. It appears nothing changes in life. Indeed, some people can be slow in recognising the worthlessness of material things.
*
I'm looking forward to seeing Steven Berkoff (actor, director, playwright, author, etc) in a live performance where he will present an exploration and analysis of Shakespeare`s most villainous characters. Berkoff remains a rare and authentic talent and long may it continue.
*
I enjoy watching the rain falling when I am sheltered in my local library. When the rain is particularly heavy it's amusing to observe people rushing about with their shoulders hunched up who believe this activity keeps them dryer. Occasionally, the windshield wipers on vehicles travel super-fast sending flying raindrops to torment the drenched souls even further. Those that curse the rain are destined to fight a losing battle.
*
Reflections: I was stopped by the police today for speeding which I found upsetting as I was walking at the time. I will appeal the conviction with rigor if I can find him.