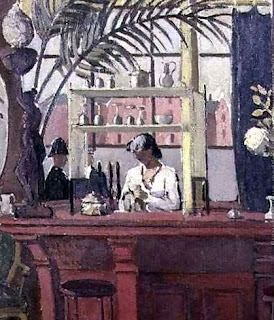 TESS: early 20's - a confident, vibrant and cocky female. She understands life has more to offer than her present existence.

JOHN: early 20’s - though well-dressed in a suit and tie he appears submissive and nervous. His conversation and actions display considerable unease.

ROSS:  mid 50's -  a part-time lecturer and unsuccessful writer. He possesses a dry, acerbic wit. His marital status is ambiguous even though he wears a wedding ring.

The action is continuous and takes place in a bar.

When part-time barmaid TESS and a middle-aged customer ROSS are joined in the bar by JOHN, the divisions between fantasy and reality become vague. None of the characters remain untouched by the events that unfold on a quiet afternoon.

ACT ONE (Part One)


[TESS is behind the bar wiping the counter. ROSS (the only customer) is sitting on a bar stool. He lifts his glass - half-full of brandy - to enable TESS to wipe the counter.]

ROSS: The one thing that radically changes one's life is death and believe me I’ve experienced both. I died in New York last Tuesday and was boxed home by Friday. Here I am; a man devoured by life, reborn!

ROSS: Facts are to play with when bored and you feel utterly useless. May I kiss you good night?

TESS:  How many times have you been married?

TESS: And the second?

ROSS: We should hit the road together. You can be Clyde and I’ll be Bonnie Rabbit. Of course, we'll be the focus of outrageous attention. They'll say we're both mad or one of us. Photographs will confirm it's me. [With a slight snigger.] At night I'll play your favourite songs on a piano. I don't believe you've heard me sing?

TESS:  I’ve heard you talk and I’m not sure what language it is?

[TESS and ROSS both smile.]

ROSS: The place is quite today. Must be a lot of people in their bathtubs ... perhaps to calm their nerves? Playing with their little boats. I get out the old tin tub once a week. I, however, require a heavenly creature  present to restore my soul, keep me in high spirits and to pass me a lovely warm towel.

TESS:  What exactly is your line of work?

ROSS: Let me get the chronology right ... For a short period I was Emma Bovary’s accountant. Then I read street, shop and advertising signs for a man in Paris who was hard of hearing. For four weeks I was a chestnut tree: one of many surrounding a square in Montparnesse. Presently, besides being a fruitless writer, I make cameo appearances in flourishing novels. [He finishes his drink.] The money’s not great ... [TESS laughs.] Which reminds me?

[TESS takes the glass; fills it with brandy, and places it in front of ROSS.]

ROSS: Cheers. [Takes a mouthful.] Marvellous. [Pause} My lungs have resumed full working order. As for the rest of my body ...? I await confirmation.

[TESS smiles and goes in to the storeroom behind the bar. JOHN enters, walking slowly and awkwardly towards the bar. He runs a hand through his hair and nods sheepishly at ROSS.]

ROSS: Have you brought news from the outside world?

ROSS: I’m starved for news. Is the world all right? [gestures towards the door.] I’m curious? Aren’t you? Isn’t everybody?

[During a brief silence ROSS takes a drink and looks at JOHN again.]

ROSS: You remind me of a zombie. An ex-wife, in fact. Why don’t you sit down? Let’s have a tête-à-tête. I’m all ears. That’s a figure of speech by the way, just in case you have poor eyesight.

[JOHN remains standing at the counter unsure what to do with his hands. He taps his fingers on the counter.]

Reflections: My neighour isn't pleased with my new garage. He says it takes up most of his living room and kitchen. He has no thought for anyone but himself. When I'm revving my car engine all I can smell is cooked food.