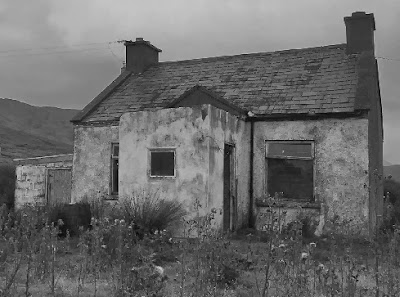 The cottage is silent and deserted, and rain falls through holes in the roof, delicately touching my shoes. I recall exceptional times, and exceptional people to whom this ruin was once home.

I met Arthur for the first time at the grocery store. He was thin, and wore his clothes like an old, wire, coat hanger. Though much older than me, we talked, wherever, and whenever, we met. In fact, he worked along with my father as a farm labourer. Arthur treated all women with courtesy - an old-fashioned trait, seemly, by some men today - and had an easy, relaxing disposition. He was full of commonsense, and not an inkling of bitterness permeated his body.

One day, Arthur, told me about the night he first met Ellen. I listened intently as we sat beside a stream; the glint of the sun playing with the steady current. His first recollection of Ellen was her kicking him in the face. It was during a dance held in a local church hall some thirty years earlier. Ellen's right foot had caught Arthur's nose as she fell on the floor. After an abrupt silence they both went outside and successfully suppressed the bleeding. He recalled it had been an unseasonably warm and windless night.

Ellen looked at Arthur with her bright eyes.

'Well, I don't know? You just kicked me in the face. Maybe I'm wrong, but I think a relationship with you could lead to more violence down the line?'

'What weight are you? Seven stone? I'd take you for ten at least?'

'Ten stone, stupid! What weight do you think I am?'

'It's hard to say. It's getting dark, and the moon isn't bright tonight?'

'You're upsetting my blood pressure!'

'No need to be shy.' Ellen whispered in a warm and sensual tone.

They sang two or three choruses together. Arthur sighed, but there was something about Ellen he liked. She made him feel good with her boisterous laughing, nudging and winking. There would never be a dull moment with her around. They agreed to meet the following Saturday night.

Spring turned to summer and they tied the knot. Arthur got drunk at the modest reception after the wedding, and Ellen had to carry him the whole way back to their cottage. Arthur & Ellen; Seven stone & Eighteen stone; Skin & Bone. When Ellen died, Arthur moved to England, and rented a small room from an elderly lady who cleaned the local Mission Hall.

It's cold and dark as I depart the ruin of the cottage. The rain plays tricks, and voices and conversations appear to flow from the cottage; forging their way into my mind, memory, and the depths of my soul.


*
Reflections:: Did you know the name ‘digestive’ originated by reason of the high content of baking soda used to aid food digestion? Neither did I, until I sought an explanation from one of my teacher’s.

Ms Peters seemed to know a lot about biscuits. In fact, she informed me about the history of biscuits, including tube packaging and brand portfolios. During her account Ms Peters became quite energised and passionate. Her eyes bulged, and her hands whirled in escalating loops. I thought she was deranged. Imagine knowing so much about the history of biscuits, and getting excited telling how different generations enjoyed eating them. What sort of nutcase is that? I bet she went home every day after school and scoffed digestives until she fell asleep.

Anyway, someone told me that Ms Peters exploded in school one day and as a result all the pupils in her class were covered in baking soda. For some reason, after this incident, there was a startling decline in pupil's attending the school with 'acne and pimples'. I never found out who Acne and Pimples were? Probably got married? Who nose?