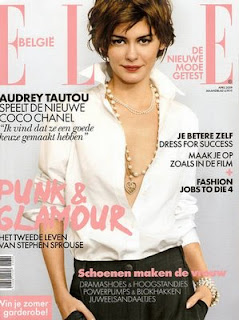 Audrey Tautou certainly charmed me as the ingenue in Amelie. I'm pleased to learn Audrey plays the heroine in Anne Fontaine’s film Coco avant Chanel (2009) and is the new face of 'Chanel No 5.' I believe the poster for her new film has been banned in France. It features the French actress holding a cigarette and is deemed 'unhealthy and inappropriate.' Paradoxically, further publicity for the film.

It is difficult for me to imagine Amelie played by another actress. Indeed, Audrey's gamine face is now world famous. She possesses a child-woman persona, and a performance style that embraces naturalness and ingenuity. She has also been graced with high cheekbones; big, dark eyes; beautiful, smooth skin; plump lips & a sexy smile; and a symmetrically, attractive beauty.

I travel periodically to Paris in forlorn hope of encountering Audrey in a boutique, a gallerie, or just passing by on the sidewalk on a warm autumn evening beneath a fog of neon.


I went to see one of the Psychic Sisters at Selfridges - £70 for a thirty minute reading (anything by Tolstoy, or Proust, was an extra £30). The lady told me I was wearing a blue shirt, my own hair, my wife's underwear on my head, and glasses - uncanny. When I inquired if she had foreseen the current recession, the downturn in the world markets, it transpires that Claire was on a caravan holiday in Dorset and had left her Tarot Cards, crystals and reading glasses at home.

I left her shuffling Tarot cards in her purple booth, myself £70 poorer. She prophesied I would meet someone in October. However, Claire wasn't sure of the year, place, sex of the person, or if I should bring an umbrella. How these people know such things is mind-boggling.

Well, I didn't make the 'Time 100 List' of the most influential people on the third planet from the Sun in 2009. Arnold Schwarzenegger's piece, however, on 'Heroic, Uncle Teddy' Kennedy is satire, only Arnold S. doesn't know it. Mary Jo Kopechne's surviving relatives' must live in a state of constant despair. A diver reported that Mary Jo Kopechne positioned herself near the back seat wheel well where an air pocket had formed, and had apparently suffocated, rather than drowned. It's a pity - and a tragedy - that 'heroic, Uncle Teddy' didn't stay at the scene of the accident and make an effort to rescue Mary Jo.


*
Reflections: We are all competitors for attention, jobs, promotion, status, power. The people most admired tend to be successful: the winners. Those individuals least admired tend to be those whom life has treated less well: the unemployed, the poor, the homeless, the mentally and psychically ill. Injustice, oppression and evil are created by human beings and, on certain occasions, deliberately sustained for political and economic ends.

How the perpetrators' of injustice, oppression and evil sleep sound in their beds when the dark descends is one of life's perplexing mysteries.