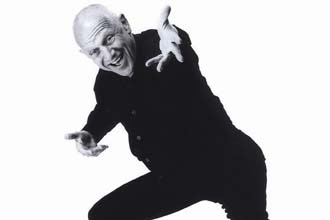 Did the 'man in black' deliver the goods during his one-man show, so to speak? Indeed, and much more. He used his gifts of mime, impersonation, sheer stage presence, to deliver a truly polished, physical, and mesmerizing performance. His analysis of villains, in general, and several of Shakespeare's villains, in particular, was a mixture of comic stand-up, and thespian histrionics.

His performance was insightful, thought provoking, and witty. Indeed, contemporary politicians, political ideologies, and other devious characters who pound our god-forsaken earth daily striving to obtain, and sustain power - at all costs - did not escape his mighty tongue. Think Clinton, Bush, Blair, Mugabe, theatre critics, actors, bosses, work colleagues, pseudo-friends, etc - the list is endless, but you get the drift? A true talent, and dare I say, perhaps a genius.

I have been a great admirer of Berkoff's works for years. An authentic, cerebral maverick. I met him after the show in the lounge of a local hotel. I congratulated Steven on a great performance, and was grateful to exchange pleasantries. I took him out to my car and opened the car boot to introduce him to my wife. The fact that she was tied up, and her mouth duct taped alarmed him somewhat, but when his eyes lit on her face, I think I saw a flicker of understanding cross his features. A riveting night, indeed. I must remember to take my wife out of the car boot.


Like Lady Macbeth I used to sleepwalk: mostly at work during the day. Contrary to myth, there is no evidence to suggest it may prove fatal to wake a sleepwalker unless they are in the process of driving a vehicle, or flying a plane. Unfortunately, I now experience sleep paralysis. This is quite frightening, and happens as people are entering or leaving sleep - usually by a rear exit. I find sleeping while standing on my head helps. Although my beard tends to cover my face, cutting off the oxygen supply, causing temporary suffocation, and extreme itching of the forehead.


Today, I went to the local Police Station and told the Duty Officer I felt someone was watching everything I did. He took the mirror out of my hand, and told me to get lost. Is this what we pay our taxes for?

Reflections: I was considered by my parents, siblings, extended family circle, and an extended train strike in 1981 to be academically challenged. My mother always turned into a hamster when my exam results arrived. With popping eyes, puffed cheeks, and a blood-drenched hatchet held aloft, she would often scream “You possess no genes of mine!” Well thank God for that. At times she could be unintentionally funny.