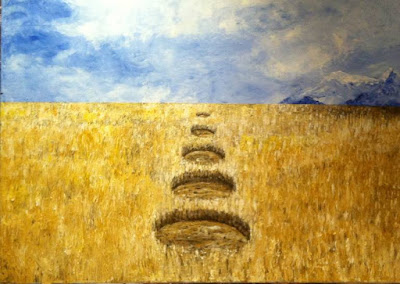 I woke this morning - which is always a good thing - to a strange phenomenon. The handmade velvet blanket covering my bed was emblazoned with crop circles. I know such formations usually appear in wheat, barley, rye, and other crops adorning this Earth. Often on highlands and intricate in design. How an alien spaceship landed in my bedroom without wakening me has left me unsettled. However, I believe that the experience has cured an ailment which has plagued my entire adult life: I can finally walk without my mouth open.


When my wife came into the bedroom she give an unearthly scream; she had never seen me without my pyjamas before. She began to laugh - an emotion she hasn't the countenance for - and conjectured that it may have been the work of pranksters who had breached our home during the night.

I don't believe in 'paranormal activity' except when my wife and I attempt sex. How will I sleep tonight? Probably with my eyes closed. I have sprinkled wheat on top of the bed in case the aliens return. I'm frightened they may revert to violence or sexual experimentation if their desire to create crop circles is infringed. Tonight I intend to sleep in an iron stove in the kitchen disguised as burning coal. My wife can sleep under the carpet in the living room if she so desires.


*
The synopsis of my new novel is based on a wealthy charmer who paints still life, before life, after life, and blocked sinuses. In the story the protagonist falls in love with his easel. Unfortunately, they break up following an argument as to whether Picasso ended his life bald or without hair.
*
It's funny how your memory works? Mine works part-time at McDonalds. I remember my physics teacher saying sarcastically he could foresee a bright future for me. After torching the school I burned down his house. His prediction turned out to be correct. It’s strange that his forecast didn’t include having the Fire and Rescue Service on standby? Guess you win some, lose some . . .

I don't believe they missed anything of value, somehow.