When Things Go Right, Something Must be Wrong 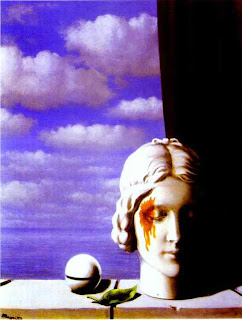 I enjoy urban walking, eating out, browsing in shops, indoor and outdoor markets; preferably in a country other than my own. There's less chance of bumping into someone you can't place either in name, or relevance. Lapses of memory can happen to anyone. I remember one day wearing a yellow pullover to work, and only becoming aware of my 'fashion faux pas' when my orange shell suit caught fire on the train journey home.

Last week I met a woman I couldn't place. We conversed about the weather, the recession, politics, philosophy, and where the moon goes when it disappears into the sea. She reminded me of Mickey Mouse. I believe it was the prominent black ears and squeaky voice. Try as I might my memory failed to recall her significance. In a way it's like treading a narrow, steep, mountain path in cold, weary weather, only to wonder why you didn't stay back at the warm hotel and order a bottle, or two, of Chablis Fourchaume, and get tipsy.

No sooner was I having my hair and beard trimmed when I remembered the woman was my wife. Absurd, yes, but the incident did make me smile. Suddenly I was consumed by a mania for cheap Mexican food.


I've just completed a draft film script titled: When Things Go Right, Something Must be Wrong. The script has no dialogue, sound, or action, which should save valuable time and money on production, rehearsals and filming. The difficultly is selling the project to a nutcase who wants to break into film, and thinks mise-en-scène involves sex with a baguette, or worse, pilchards.


Today I went sailing, and took my two dogs, a neighbour's cat, and some food to eat on the journey. The animals were very noisy, and a bit unsettled. Frankly, I found their behaviour annoying. About thirty minutes into our voyage I realised I had forgotten the boat and that my sandwiches were wet. No wonder the animals were restless. It's strange how your mind can desert you when you need it most.

*
Reflections: I've two married sisters called Housefly and Barfly. Thankfully, I hardly ever see them. When they call at my home I pretend I'm at the end of a long corridor. They incessantly engage in conversations about panic attacks and the benefits of lithium.

It is my view they're both crazy and shall remain so. They appear unperturbed by the fact they're living their lives in similar fashion to that of our parents. While not a crime in itself, it should carry a mandatory jail sentence.